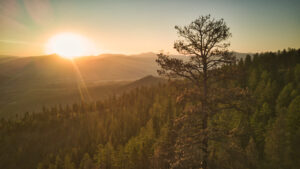 A recent acquisition of 14,800 acres in western Montana will add to the 2-million-acre footprint of the Lolo National Forest simultaneously conserving roughly 8 miles of the Lewis and Clark National Historic Trail and about 12 miles of the Nez Perce National Historic Trail corridors designated by Congress in 1978 and 1986, respectively. The Lolo National Historic Landmark, which roughly traces the route taken by Merriweather Lewis and William Clark and their Shoshone Guides during their westward exploration of 1806 and other historical travels along Lolo Creek, will also be conserved by the acquisition.

The three-year process of acquiring the land began in 2018 when the landowner–a timber and real estate holding company called Weyerhaeuser–was considering divesting its Montana land holdings and so approached the Trust for Public Land about potentially purchasing one or more of their parcels in the State. Using a newly developed GIS Tool called the Northern Rockies Decision Support Tool, TPL identified the Lolo National Forest site as a high priority. Says Catherine Schmidt, a TPL Field Representative based in Bozeman, Montana who was intimately involved with the project, “This Lolo Trail Landmark Corridor really jumped out… (because) the Nez Perce National Historic Trail and Lewis and Clark National Historic Trail just sliced right through this property.”

TPL approached USDA Forest Service (USFS) staff at the Lolo National Forest about possibly working together to acquire the historically significant parcel and found that USFS already had their eyes on the land, as well. “There was a lot of management efficiency to be gained here so we were immediately interested in and identified this (parcel) as a priority for acquisition,” says Patrick Bridegam, a Realty Specialist for the USFS based in Missoula, Montana. Bridegam says it was also clear pretty quickly that the land would meet “all of the criteria of being competitive for LWCF (Land and Water Conservation Fund) funding.”

From there, TPL calculated a rough estimate of the value of the property and realized that it was likely too expensive to be fully funded by a single LWCF request. So, the USFS and TPL went back to the landowner to negotiate a contingency contract that allowed them to break the request up over two years. The Lolo National Forest then nominated the full parcel in two pieces across two separate LWCF funding years, submitting in both the fall of 2018 and 2019 for fiscal years 2020 and 2021. Fortunately, both nominations succeeded and the USFS was able to purchase the entire 14,800-acre property for a price of $10.8 million all at once in the summer of 2021.

For those looking to get into land acquisition for their Trails, Bridegam has some advice. “These projects really work best when there is early coordination between the agency, the partners, and the land owner,” he says. In this case, Bridegam says that early coordination “allowed us to really highlight and understand the significance of the overlap between the Historic Trails and the lands that would be coming into Forest Service management. So, the (National Historic) Trail piece was key, but it was part of a larger conversation about whether or not this acquisition was a priority or a good fit.” Still, says Bridegam, “early communication between all the parties and bringing up the significance of these trail corridors early in the process…was really what made this successful.”