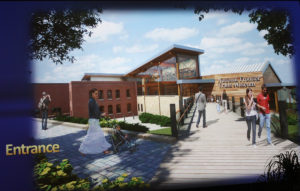 In 2017, the State of Missouri transferred its ownership of the National Frontier Trails Museum (NFTM) to the City of Independence, which has enabled NFTM to dust off its future building plans and have a fresh updated look. According to the Oregon-California Trails Association (OCTA) Trails Head Traces newsletter, the goal is to expand so that they can tell a more regional story of the mountain men, missionaries, and Lewis and Clark, Santa Fe, Oregon, and California national historic trails. Projects include adding an elevator so the second floor storage space can be transformed into office space, archives, a library, gift shop, and public lobby. The first floor will become the multipurpose room for lectures and meetings, and the existing auditorium will feature interactive displays. There will be a campsite area, shelter, and play center for picnickers, and the Chicago and Alton Depot will remain with its train engine. Parking will move to the new entrance, and the current lot will become a plaza. The Mill Office will be redone as the new OCTA headquarters.

A National Trails Center (NTC) is being proposed for St. Joseph, MO. “The NTC would be part of a much larger overhaul of the entire downtown St. Joseph cityscape, which would incorporate the city’s significant national historic trail resources into a heritage tourism/economic driver type of package in city planning,” said Travis Boley, Oregon-California Trails Association (OCTA) Manager. OCTA’s intern, Lauren Manning, is working out of city planner Nic Hutchison’s office to study how this change might be enacted. A National Park Service charrette is slated for November to seek input from St. Joseph’s leaders and citizens on what such a downtown plan might include. According to an article from the St. Joseph News-Press, “the venue is destined to become a centerpiece of the community” and “will feature a family event center, living history demonstrations, interpretative events, and multimedia programs.”