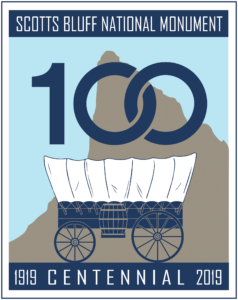 While the history of the Oregon, California, Mormon Pioneer, and Pony Express national historic trails have been cemented in the cultural identity of the United States since their inception, one landmark along these notable paths will celebrate its 100th anniversary in 2019. Scotts Bluff National Monument, located in the panhandle of western Nebraska, was established on December 12, 1919 by Presidential Proclamation, marking the first time that the Antiquities Act of 1906 was used to preserve a landscape based on the westward expansion movement “Manifest Destiny.”  The purpose was to “preserve the scenic, scientific, geologic, and historic integrity of Scotts Bluff.”

The monument provides protection for 3,003 acres of the historical scene, the associated geological features, and natural and cultural resources in perpetuity. The overland trail remnants through Mitchell Pass signify one of humankind’s most epic migrations to America’s western frontier. The 800-foot high bluff rising from the seemingly endless flat prairie near the North Platte River marked the change in terrain between the prairies to the east and the mountains to the west. More than just a physical landmark for emigrants, it served as an emotional milestone for pioneers seeking progress on their journey to a new life. 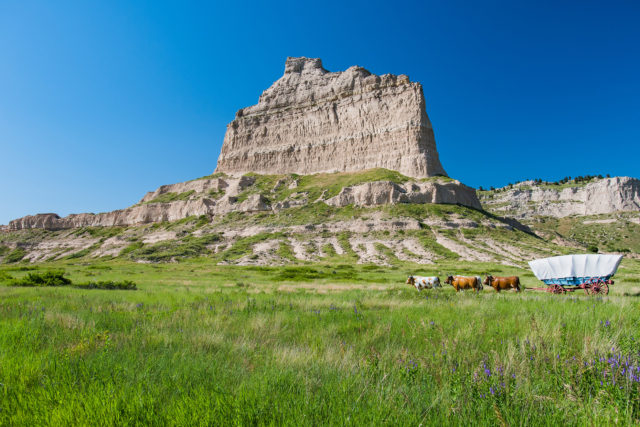 Visitors to Scotts Bluff National Monument can walk along the Oregon Trail and view replica wagons in the shadow of Eagle Rock through Mitchell Pass. Photo Credit: NPS/Wagner

In the spirit of community strength, an entire year of programs and events are scheduled to commemorate the centennial. Seeking to “empower the pioneer spirit for future generations,” most programs are newly forged partnerships with community groups. Several Humanities Nebraska speakers will provide presentations on forts of Nebraska, the Native American traditions of local tribes, and the legends of the American west. Those who grew up playing The Oregon Trail computer game of the 1990s will feel the nostalgia when Philip Bouchard, lead designer of the iconic educational game, joins in the centennial festivities with two presentations on June 7-8, comparing and contrasting the game with the real Oregon Trail. Commemorating the short-lived Pony Express, the Pony Express Re-Ride will blaze through Scotts Bluff on its journey to Sacramento. A representative from the National Pony Express Association will talk about the Scotts Bluff station along the Pony Express Trail.

Considered a “landmark of the ages,” Scotts Bluff still serves as a landmark for weary traveling families and continues to be woven into the fabric of the North Platte River Valley community. Whether you are interested in westward expansion trail history, advances in telecommunications and the telegraph, ancient volcanic activity that shaped the geology of the Midwest or the intricate prairie ecosystem, Scotts Bluff National Monument is home to it all.