Taken at the Abingdon Muster Grounds, the northern trailhead of the OVNHT. Theresa Yates is one of the volunteers operating the visitors center under the MOU with the Town of Abingdon. Junior Ranger Lowe is being sworn in after completing the requirements for Junior Ranger. Photo 2021 credit OVTA

An MOU was signed between the OVTA and the Town of Abingdon, Virginia to reopen the Keller Interpretive Center on a limited basis using local volunteers. This interpretive center sits at the western Trailhead of the OVNHT. Being a trail based around a story from the American Revolution, leadership from both sides of our trail are involved in planning committees for America250, commemorating the 250th anniversary of the American Revolution in South Carolina, North Carolina, Tennessee, and Virginia.

Both the OVNHT and OVTA have continued to develop virtual programs to share with public visitors and schools, each creating YouTube channels with over 70 educational videos combined, and ideas for many more in the future. These channels have had tens of thousands of views to date. 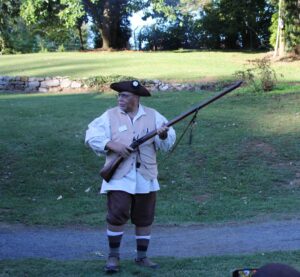 During the anniversary commemoration of the journey down the trail in 2021, over 8,000 people were able to personally hear the story of the trail from the OVTA, with funding and assistance from the OVNHT. One special highlight from this past commemoration was the opportunity to highlight the story of John Broady/Broddy, an enslaved man who served with the Patriots as they journeyed down the trail to the Battle of Kings Mountain in 1780. This story was shared by one of John’s direct descendants, Arthur Broady, who joined with the OVTA for part of the annual commemoration events. John’s story, as told by Arthur, is available on the OVTA YouTube channel Overmountain Victory Trail Association. 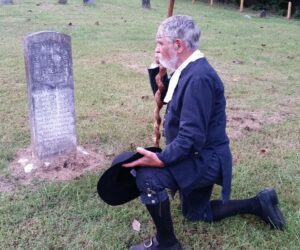 Taken at Brittian Church, a significant site on the OVNHT segment from Morganton to Rutherfordton. John (Pappy) Hawthorne paying respect to his ancestor mortally wounded at Kings Mountain on October 7, 1780. Photo 2021 credit OVTA.

The latest Master Plan, number eight of a planned ten, links Morganton, North Carolina, where the northern and eastern legs of the OVNHT meet, with Rutherfordton, North Carolina. This significant section of the trail includes four encampment sites for the Overmountain Men, including Gilbert Town. This is the only site used by both the Tory army under British Major Patrick Ferguson and the Overmountain men. This segment also includes the final resting places of numerous Kings Mountain veterans including Lieutenant Thomas McCulloch who died of wounds received at KIngs Mountain.

This important segment resulted in a memorandum of Agreement between the OVTA and THE DEPARTMENT OF NATURAL AND CULTURAL RESOURCES, NORTH CAROLINA DIVISION OF PARKS AND RECREATION North Carolina has adopted the OVNHT as the Overmountain Victory State Trail, and has committed $29.25 million in the current year budget to their network of twelve state trails. We look forward to many years of working with the North Carolina State Trail system. 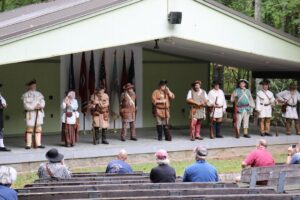 Taken at Kings Mountain October 7, 2021 as the OVTA presented the Story of the Overmountain Men at 3:00 pm, the time of the battle. Photo 2021 credit NPS.