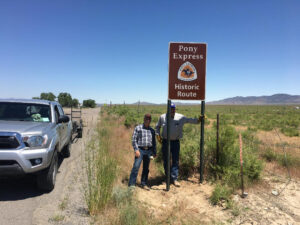 Today, the Association’s annual Pony Express re-ride, which takes place between St. Joseph, Missouri and Sacramento, California every June, follows the original route as closely as possible primarily along a series of rural roads, though that route has yet to be marked in many places.

Hearty, who participated in the installment of 12 signs in Juab County Utah just west of Salt Lake City earlier this year, says that the installation of trail signs involves cooperation by multiple State and Federal agencies. The signs for the Tooele and Juab County projects were designed and produced by the National Park Service office in Santa Fe, New Mexico and placed according to a site plan developed by Madison Vandersee and David Jenkins. Each State division of the National Pony Express Association, however, must supply the posts, hardware and personnal to install the signs. The posts and hardware for the Tooele County project were funded by a Tooele County Tourism Tax Grant, according to Hearty. Materials for the Juab section of the Trail were provided by Juab County. Much of the land on which the signs were installed is managed by the Bureau of Land Management, however, and the roads themselves are usually maintained by State and County offices.

Hearty says he’s been impressed with the level of cooperation involved in the signage projects he’s been involved with. “It’s just such a good partnership,” Hearty says, adding, that “it’s a real collaborative effort to get these materials in place.”

The 12 signs installed in Juab County complete the Trail-marking efforts in the western part of Utah. To date, Hearty says they’ve covered a total of about 140 miles of Trail in the State, or about half of the length of the Trail in Utah. Other efforts to mark the original route of the Trail are also underway in Nevada, where installations have covered roughly a third of the State’s Trail, or about 150 miles, and efforts are already complete in the 30 or so miles of Trail in Colorado.

“We just appreciate the opportunity to work with our Federal partners and to get their signs out there and do something meaningful for the education of the public and the preservation of our history,” says Hearty of his experience with the project. “We’re grateful to commemorate this history (of the Pony Express) and to be able to keep it alive for future generations,” he says. “If we can help them to understand where they came from and what went before, I think we can give them a chance of seeing where they’re going.”