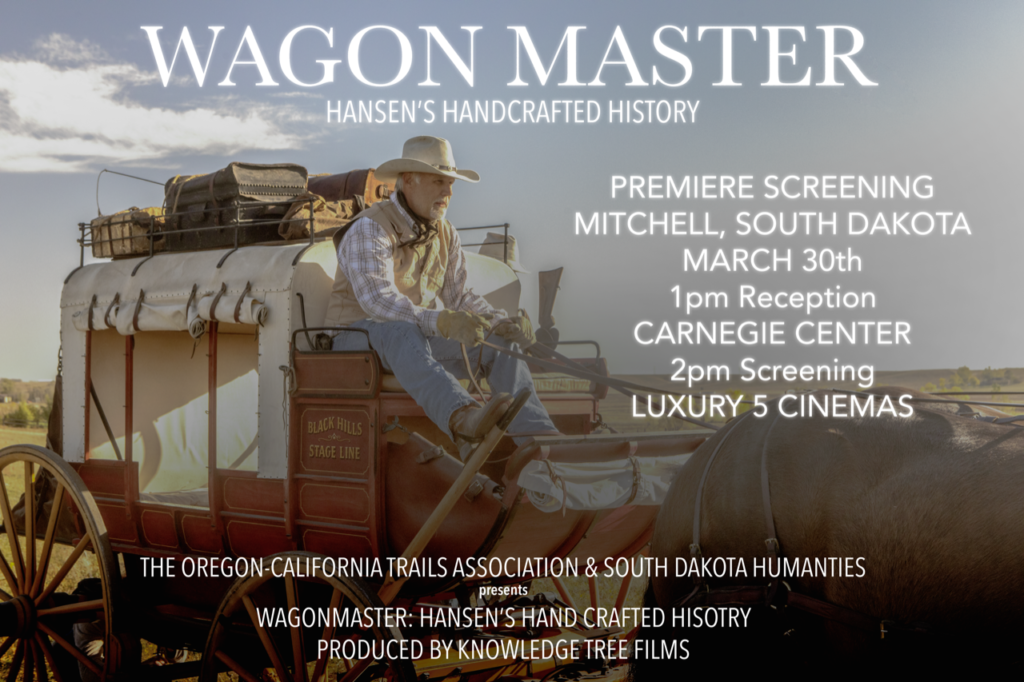 Wagon Master: Hansen’s Handcrafted History had its red-carpet premiere on Wednesday, March 30, 2022. The documentary, produced by the Oregon-California Trails Association and Knowledge Tree Films, premiered at the Luxury 5 Cinemas following a reception at the Carnegie Center in Mitchell, South Dakota. The event was filmed so everyone could enjoy it later. Through an agreement with South Dakota Public Broadcasting, the program will air over the next three years.

Wagon Master follows Doug Hansen, proprietor of Hansen Wheel & Wagon in Letcher, South Dakota. Doug and his team of a dozen craftsmen restore and build wagons and stagecoaches. Outside of Amish craftsmen living in small villages that dot the American countryside, Doug is one of the few people in the United States who is keeping this 19th-century transportation technology alive. He has supplied wagons and stagecoaches (as well as repair services) to numerous movies and television shows, including the stagecoach used in Quentin Tarantino’s The Hateful Eight and wagons used for Dances With Wolves and popular shows like Yellowstone and 1883. His team also builds and restores wagons for museums and corporate businesses as well as for people who want to own a wagon.

The documentary, funded through a grant from the South Dakota Humanities Council, was the latest in a series of professional video productions created by OCTA.

Before Wagon Master, OCTA won a small grant from the Missouri Humanities Council (MHC) to create the short film Wilson’s Creek: History Along the Wire Road, about the road through Wilson’s Creek Battlefield outside of Springfield, Missouri. This was an early wagon road that connected St. Louis to southwest Missouri and northwest Arkansas. The corridor was used, in part, by the Cherokee during forced relocation along the Trail of Tears. In the 1850s, it was the route of the Butterfield Overland Stage. Connected to Ft. Smith, Arkansas, it was an important route for emigrants to California. It was also the site of the second major battle of the Civil War.

With the money received from MHC, we were able to create a 13-minute video. However, we quickly realized we had more than enough great footage to elongate this into a 25-minute piece that would be attractive to PBS. To stretch it to this length, however, we need to raise another $5,000 to engage our video editor with further work. We were recently awarded a grant in that amount from the Midwest Trust of Kansas.

History and Change on the Old Spanish Trail was OCTA’s first video production made by a professional film crew. It was created through a partnership with the Amargosa Conservancy, a land trust that preserves pristine sections of the Mojave Desert along the Amargosa River just south of Death Valley. The film examined the evolution of the Old Spanish Trail, its millennia of use by Native Americans, its use as a mule-pack trade route between Santa Fe and Los Angeles, its improvement by Mormons for use as a wagon road, and finally, its role in the California Gold Rush.

This 25-minute documentary now streams on KVCR out of San Bernardino for the next five years, meaning our name will have millions of impressions all over Southern California until 2025. It is also streaming on First Nations Experience (FNX), a station managed by and for Native Americans that broadcasts in 25 states with over 75 million subscribers.

These documentaries were created with the help of Sun Runner Media and Knowledge Tree Films. Grants from State humanities councils made these features possible and allowed OCTA to go from no-budget or small-budget videos to professionally created films.

OCTA is in the beginning stages of a massive fundraising campaign, so increasing our name recognition is a high priority for us right now. We believe that these projects help get our name and brand in front of more people than ever. OCTA will continue creating high-quality content to augment our fundraising and recruiting activities and poise the association to remain competitive in the world of historic preservation.

OCTA began its foray into video productions with the help of Sam Sullivan, a digital media intern hired with the Trail Intern Grant from the Partnership for the National Trails System. Sam, a recent graduate of William Jewell College in Liberty, Missouri, had experience in digital media and excellent internship opportunities that helped him gain experience in an area where OCTA needed help. Together, we set out to populate our new YouTube channel with short videos focused primarily on sites in Kansas and Missouri. We covered historic sites, trail pioneers, and African-Americans on historic trails. Later, we were able to travel to Arizona and create a slew of videos along the Southern Route as well.