Old Spanish NHT to be featured in 2019 documentary film

The Museum of Moab, working with a consortium of partners such as the Old Spanish Trail Association, is producing a documentary film about the Old Spanish National Historic Trail (OST) and its history in Eastern Utah. The 14 official sites in San Juan/Grand Counties will be introduced and some sites will be featured with film footage, which can emphasize the special natural history features of the site, such as artesian springs, animals, and plants that can be found there. In keeping with National Park Service/Bureau of Land Management recreational goals for the OST, the video will hopefully inspire hikers, bikers, and equestrians to travel the OST imagining what it was like to travel by mule and horse more than a hundred years ago, connecting some of the landscape and landforms with historical events. 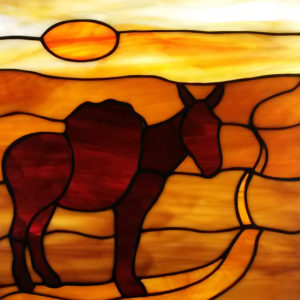 The museum has created a 70-second video teaser that can be seen at http://beanlabs.com/#!/rediscover-old-spanish-trail as well as an evocative audio clip at http://oldspanishtrail.org/momaudio.

Dennis Brown, President of the Museum of Moab Board of Trustee is the Executive Producer of the video. Chris Valentino owner of BeanLabs based in New York City, NY, has been tapped as the film’s director. Other individuals currently involved are based in the Moab area: Michael Falasco, Photography Director, and Trisha Ogilvy, Screen Writer.

Corporate sponsors and donations are being accepted to help finance the film which has a completion goal of late 2019. For more information contact: Dennis Brown at dennis.dubuque@gmail.com

The OST tells a human story of the American Southwest—a story of trade and human migration, of cultural clashes, and competition to control rich lands. It is a story as old as civilization, still in play in the American West and all around the world.

The OST has been called “the longest, crookedest, most arduous pack mule route in the history of America.” This “hooves-only” journey of 1,200 miles connected Santa Fe with Los Angeles, operating as a mule caravan route for only two decades, 1829 to 1848, years when the Independent Republic of Mexico owned the American Southwest. The Old Spanish Trail was part of a trio of trade routes that enabled international trade during the Mexican Period, connecting with the Santa Fe Trail to St. Louis, and El Camino Real de Tierra Adentro to Mexico City.

The European settlement of the American West began in the early 1800s, at a time when a weakened Spain needed to secure its hold on its south-west lands—the British, French, and infant United States all had designs on the western half of central North America.

From their old territorial capital in Santa Fe, the newly independent Mexican government (successor to Spanish rule) had long searched for a direct route to supply and keep in touch with their missions in southern California. A connection would strengthen Mexico’s presence in the interior lands it had claimed but had little control over. These routes became the Old Spanish Trail, with one of the main branches—the North Branch—used by fur trappers, passing through Moab to cross the Colorado River and then cross the Green River near Green River, Utah.