Submitted by the Lewis and Clark Trail Heritage Foundation 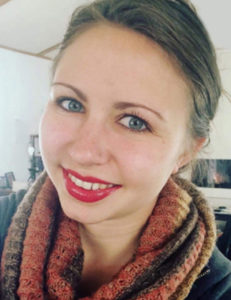 The Lewis and Clark Trail Heritage Foundation (LCTHF) announced December 5, 2019, that it hired Sarah Cawley as Executive Director to lead the national nonprofit organization. Sarah began her position at the LCTHF’s headquarters in Great Falls, MT, on January 2, 2020. She filled a position, formerly held by Lindy Hatcher since 2012, that was vacant for several months.

During the last three years, Sarah was the Executive Director of the nonprofit Sawtooth Interpretive and Historical Association in Stanley, ID. She oversaw the Association’s Redfish Visitor Center and Stanley Museum. She worked closely with the U.S. Forest Service to provide educational and outdoor experiences for the public visiting the 756,000-acre Sawtooth National Recreation Area. She is a 2016 graduate of the State University of New York, majoring in environmental education and interpretation with a minor in recreational and visitor management.

Sarah became interested in the LCTHF through her curiosity about the Lewis and Clark Expedition. “I’ve been intrigued by the explorers and what there is to learn about them beyond the historical signs that we see along roadsides,” she said. “I’ve backpacked parts of their trail and studied such topics as the botany and Native American cultures they reported about in their journals. Their story is an important part of our country’s history that all Americans should know about.”

Lou Ritten, LCTHF president, said Cawley will be a strong advocate for increasing public education and involvement in the story of the 1803-06 expedition. The 50-year-old LCTHF is the national steward for promoting the story of the explorers through public education and recreational opportunities, and preservation and enhancement of the 4,900-mile Lewis and Clark National Historic Trail through 18 states and along the Ohio, Mississippi, Missouri, Snake, and Columbia rivers.

“The sum total of Sarah’s work experience, education, and enthusiastic personality is an excellent fit with our organization,” Lou said. “She is the type of creative, hardworking leader who will help us increase public awareness and participation in the Lewis and Clark story.”

In her position with the Sawtooth Association, she oversaw a lecture series, historical festivals, oral history projects, fundraising, retail operations, membership, and a seasonal staff of eight employees. She also has experience in previous positions in New York and Massachusetts in developing educational interpretive programs and leading outdoor adventures for adults and school children.

Margaret Gorski, a past LCTHF president and chair of the 7-member search committee for the position, said committee members were particularly impressed by Sarah’s enthusiasm for helping people of all ages grow their appreciation for the Lewis and Clark story.

Also impressive, Margaret continued, were Sarah’s understanding of how to develop and maintain partnerships with Federal agencies and citizen groups, as well as Native American tribes along the National Lewis and Clark Trail.

“We are excited to have her join us and are looking forward to her leadership,” Margaret said.