So far 2017 ties the record year of 2011 for the most (15) billion-dollar disasters for the year to date, according to the National Centers for Environmental Information. Among those costly and deadly disasters are wildfires across the West and two Category 4 hurricanes along the Gulf Coast, which have also impacted the National Trails System. Some partner trail organizations have not been able to assess or repair damage yet.

On August 25, 2017, Hurricane Harvey made landfall on the Texas coast, producing historic rainfall and massive flooding. Steven Gonzales, Executive Director of the El Camino Real de los Tejas National Historic Trail Association, said that while trail sites were heavily impacted by the storm, “for the most part they were only shut down for a relatively short period of time, with no extensive damage to trail resources.” Then just two weeks later in September, Hurricane Irma swept into Florida, producing severe wind and storm surge damage. Hundreds of fallen trees are being cleared along the Florida Trail and southern parts of the Appalachian Trail, but some sections of the trails remain closed and more chainsaw certifications are needed for volunteers. 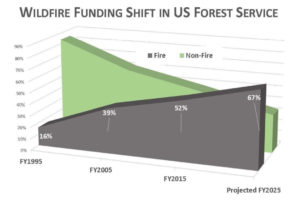 Enhanced by extreme drought conditions, numerous wildfires across many western and northwestern States have burned over 8.4 million acres and hundreds of homes during summer and fall 2017, exceeding the 10-year annual average of 5.9 million acres. This outbreak of wildfires has been increasingly demanding on the U.S. Forest Service (USFS), and the Partner Caucus on Fire Suppression Funding Solutions urges Congress to stop the destructive cycle of “fire borrowing” and support the bipartisan Wildfire Disaster Funding Act.

There have been some positives, though. For example, Teresa Ana Martinez, Executive Director of the Continental Divide Trail Coalition, said she’s seen an increase in coordination, support, and awareness from Federal agencies. And Ryan M. Cooper, Geographer for the Lewis and Clark National Historic Trail, created an interactive map showing the fires along the trail to aid in future repair efforts. Further, Mark Larabee, Associate Director of Communications and Marketing for the Pacific Crest Trail Association, said he’s seen thousands of people sign up to volunteer in the wake up these fires, which closed nearly 300 miles of the PCT this year.

“We must accept that these places are simply evolving,” Larabee said. “Many of the most beautiful landscapes we love were shaped by natural forces.”

Read reports from the trails 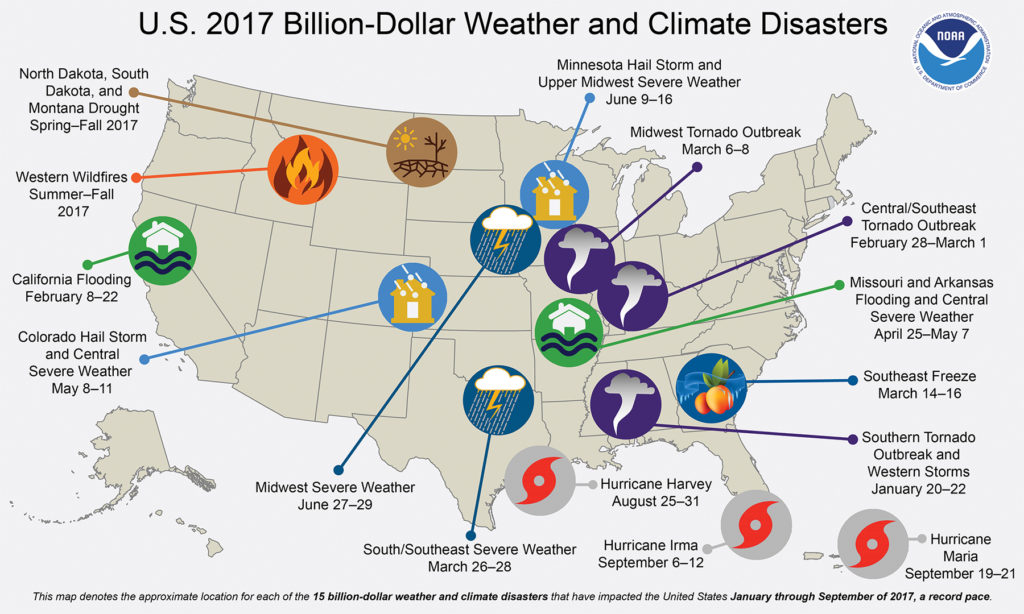 Above: This map denotes the approximate location for each of the $15 billion weather and climate disasters that have impacted the United States January through September 2017, a record pace. (Graphic courtesy National Oceanic and Atmospheric Administration)